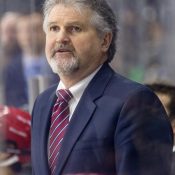 January 6, 2021 … Since March we have all had to watch COVID-19 destroy lives, businesses, and families. It has wreaked havoc on people’s plans, work and schooling. Having to tell our number one ranked team last year that we would not be finishing the season and then telling this year’s team we would not play at all, were the hardest things I have had to do in my 25-year coaching career. Watching other teams play now while our team has to sit out the season is difficult to swallow.

I recently spoke to someone who I respect a great deal. He tried to give me some perspective about the lives, business and institutions devastated by this terrible virus. He reminded me to put canceled seasons into the larger perspective. In many ways I agree with him. I am also mindful that we all face challenges in life and the focus must be on what we can impact.

There are things I’ve accepted during my career – like Ivy League practice and playing rules that are more limited than the NCAA allows but I can no longer accept the negative impact of the Ivy League rule regarding graduate-student participation in varsity sports. The heartbreak I’ve witnessed in recent months has sharpened my resolve to do better by Ivy League student-athletes. Let me explain:

The NCAA has granted all fall and winter student-athletes an additional year of eligibility this year and our guys are obviously not using any eligibility since our 2020-21 season is canceled. Ivy League rules are more limiting than the NCAA rules and Cornell has lost five players because of restrictions on participation by graduate-students. Each case is unique, but the outcome so far is that seniors Matt Galajda, Cam Donaldson and Tristan Mullin have all decided to transfer to play out their eligibility as graduate-students elsewhere. In addition, two juniors, Mike Regush and Joe Leahy also decided to transfer after accelerating their Cornell graduation because of the Ivy League rule. All these players have gone from playing on a number one ranked national team to leaving their school, hockey program and the teammates they love. Their decisions to leave broke their hearts and mine. In their eyes, the Ivy League let them down by refusing any opportunity to continue to play here while they reclaimed eligibility elsewhere from canceled seasons because of the pandemic.

The topic of Ivy League graduate-student eligibility has existed my entire career and I will push to keep the renewed debate alive. It confounds me that the Ivy League alone will not support qualified student-athletes to pursue post-graduate educational and athletic goals. I will share updates on my efforts to affect change to serve our students and university.