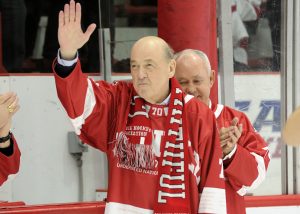 ITHACA, N.Y. – John Hughes ’70, tri-captain of the 1970 National Championship Cornell men’s hockey team and member of the Cornell Athletics Hall of Fame, passed away on Tuesday, August 18. Hughes was best known as one of the leaders of the only hockey team to go undefeated and untied en route to an NCAA championship. Their improbable 29-0 run through the 1969-70 season punctuated his decorated collegiate career. That season, Hughes was named to the NCAA tournament all-star team, first team for the All-America East Region and All-Ivy team, and was also co-recipient of team’s most valuable player award. In 1981, John was inducted into the Cornell Athletics Hall of Fame.

“John Hughes is an icon of Cornell hockey,” said Mike Schafer ’86, the Jay R. Bloom ’77 Head Coach of Men’s Hockey at Cornell. “He set the standard for what it means to be a leader on and off the ice for future Cornell teams and players. He was a man of character and integrity and lived his life with passion and a great sense of humor. His unique laugh will be missed by all.”

In an era when freshmen were not eligible to compete on varsity teams, Hughes made the most of his three years as a center with the Big Red. He racked up 151 points on 68 goals and 83 assists, which is now tied for 11th in the program’s all-time scoring list and ninth in career goals scored. He had points in 15 straight games during the 1969-70 season, including a hat trick in a January game at Yale and consecutive four-point efforts in lopsided victories over Dartmouth and Princeton in March. But even more memorable was his last goal – which came with 14 seconds left in the third period of a 3-2 win over Clarkson in the ECAC Hockey Championship game in Boston.

Originally from Scarborough, Ontario, Hughes moved to New York after graduating with a Bachelor of Science degree from the College of Agriculture and Life Sciences. He earned two more Cornell degrees – a Master of Business Administration in 1971 and a Juris Doctor degree in 1974. In 1976, Hughes started the Matays, Hughes and Franzino law firm, specializing in tax law.

“He was a truly wonderful person,” said trustee emeritus and presidential councilor Andrew Tisch ’71, who enjoyed a strong friendship with Hughes. “He loved Cornell, he loved hockey, and he loved his friends and family.”

Hughes is survived by his wife, Amy Pastarnack Hughes ’71 (MBA ’74), and their six children. Among them daughter, Sarah Hughes, who won the Gold Medal in Figure Skating at the 2002 Winter Olympics at the age of 16 and son, David Hughes ‘04, who was a member of the Cornell men’s hockey and football teams.