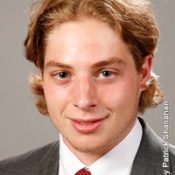 AMHERST — Ryan Bliss came to UMass with the faint of hope of maybe salvaging his playing career.

The defenseman arrived in Amherst last January as a graduate transfer praying his body would rehabilitate and hold up for one last go-around in college hockey. Unfortunately, the back injury he suffered at Cornell after his sophomore year would end up ending his career, but not his involvement in hockey. Bliss stayed at UMass this season as a volunteer assistant coach, a position he had basically been preparing for while rehabbing his injury … read more here