The Colgate community came together Saturday, Oct. 1, 2016, at the Class of 1965 Arena Dedication to celebrate the culmination of a $37.8 million dollar project that was years in the making.

The state-of-the-art facility is the new home of the Colgate men’s and women’s ice hockey teams. The Raider men’s and women’s lacrosse and soccer teams also have brand new locker rooms inside the Class of 1965 Arena.

The ice surface in Colgate’s Class of 1965 Arena is known as Steven J. Riggs ’65 Rink in honor of the former men’s ice 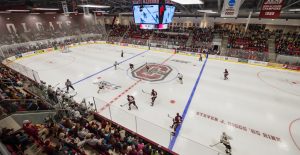 hockey team captain. Riggs was killed in combat in Vietnam in 1968 and was inducted posthumously into the Colgate Athletics Hall of Honor.

In November 2017, the Class of 1965 Arena was earned LEED Gold Certification from the U.S. Green Building Council thanks to sustainable building methods and systems.

Due to the ongoing COVID-19 pandemic, the Cornell Hockey Association events and member benefits for 2020-21 are uncertain at this time.  Please stayed tuned for further details later this season.