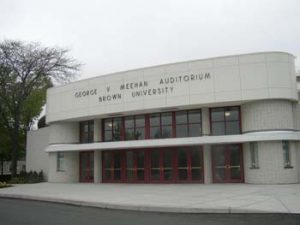 The George V. Meehan Auditorium is a 3,059-seat hockey arena, in Providence, Rhode Island. The arena opened in 1961 and was dedicated on January 6, 1962. It is named for George V. Meehan, the benefactor of the arena, which he hoped would “service and promote” the Brown Bears ice hockey program, which now belongs to the Ivy and ECAC Hockey leagues.

In 1965, Meehan Auditorium hosted the Frozen Four ice hockey semi-finals of the National Collegiate Athletic Association (NCAA). It is recognizable for its large white domed roof, and is located on the highest corner (Hope Street and Lloyd Avenue) of Brown’s main athletic complex on College Hill in Providence. It was renovated in 2002, bringing its capacity up to its current level.